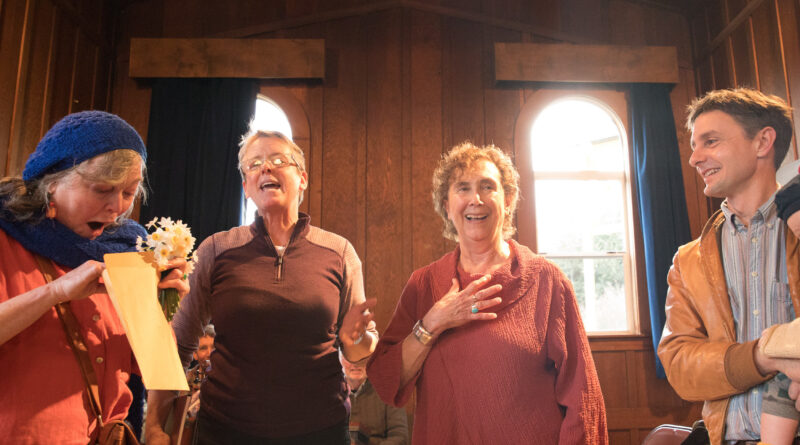 On Sunday, January 19, Mia Johnson and I met at KWMR at 1:30 PM in preparation for Lyons Filmer’s retirement party which was scheduled to start at 3 PM. Depending on where you read your info, you thought it ended at either 5 or 6 PM. Not a big deal. I’m the type of person that in most instances is happier to be working at the event, than just merely in attendance. I’m not sure why. I’m ok with small talk, don’t mind crowds of a reasonable size, and my social anxiety is minimal. But it’s true. Give me a job, and I’m a happy camper. 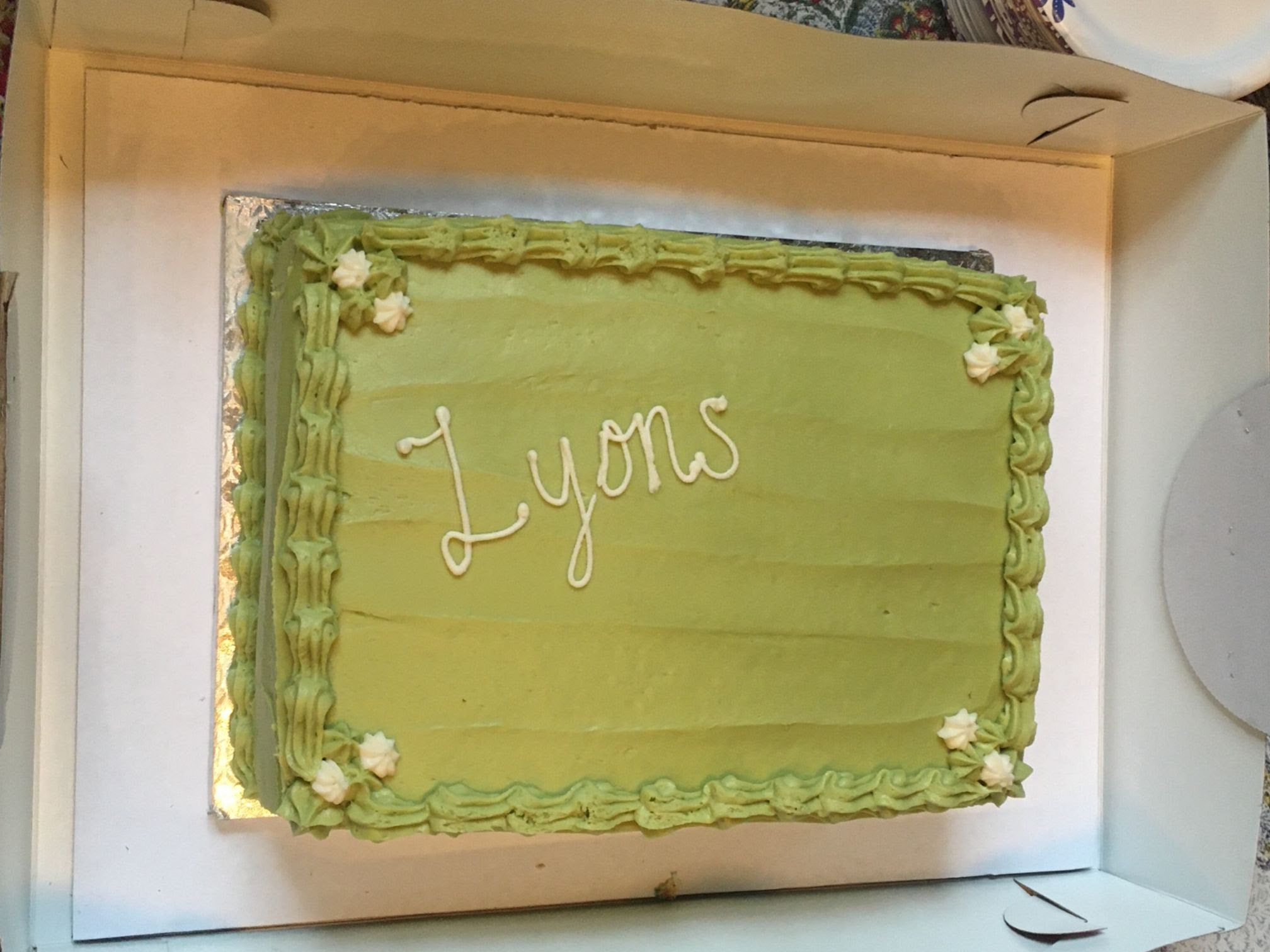 Yummy cake honoring Lyons.  Photo: Mia JohnsonMia and I had divided the responsibilities for the event, Mia in charge of creating a card that folks could sign, ordering the food, and in charge of the decorations (these are all things that she is very good at). I was in charge of reserving the space, filing the ABC form, procuring the beverages, and bringing the table cloths, and the Mt. Tam cheese. And the surprise.We have made a big deal out of Lyons’ retirement, and that is fitting. She worked at KWMR for 19 years, and is just finishing up her training with Jeff Manson, our new Program Director. Things are going great! Thanks for asking.It makes my heart sing to see Lyons sitting with Jeff and going through documents and the many different aspects to the Program Director job. Jeff is getting a good picture painted of what happens in the job, where to find things, and some tricks of the trade, I’m sure. He is now not only well suited for the role, but has been mentored by Lyons. Aren’t we lucky! 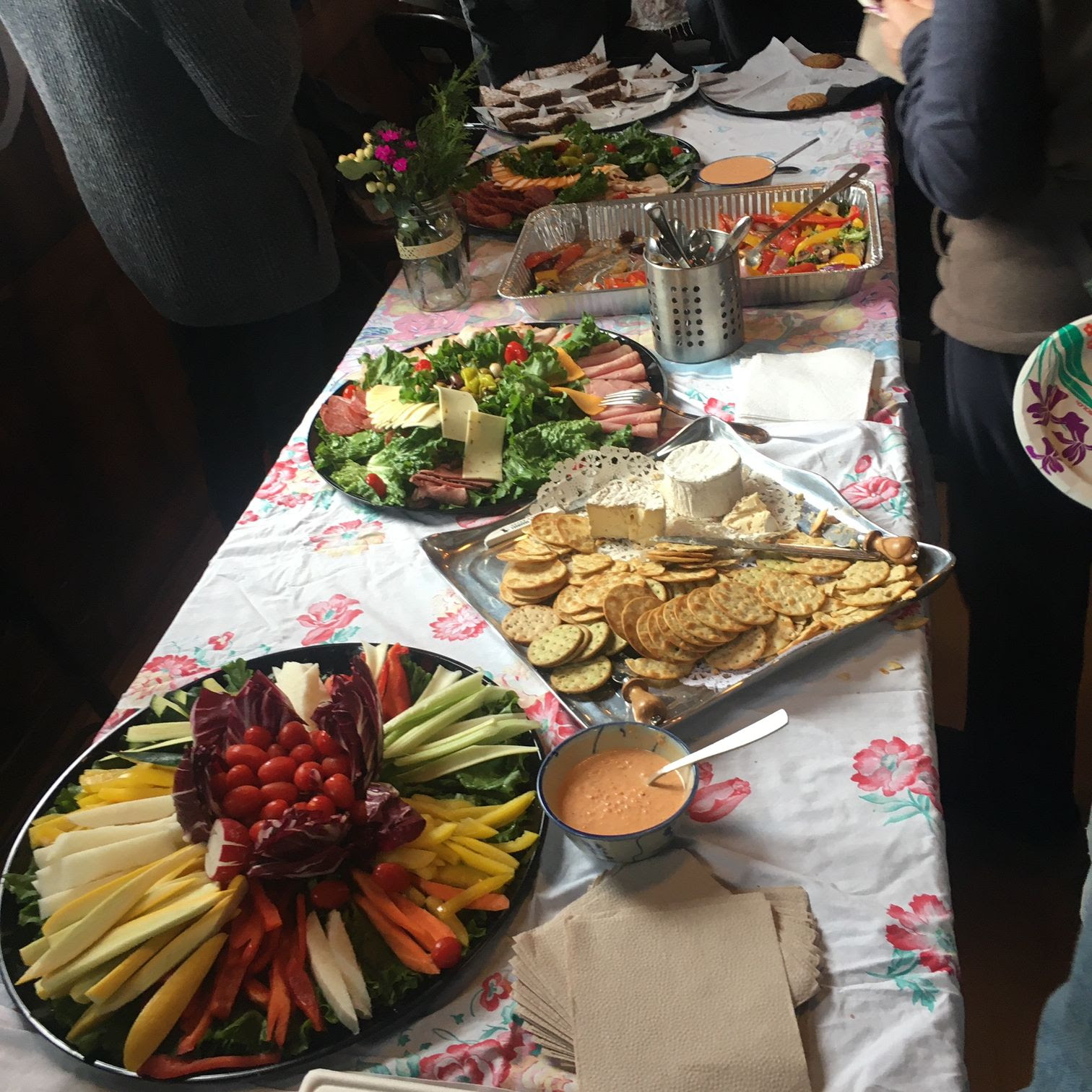 What a spread! Photo: Mia JohnsonWhen Mia showed up with the food, I was a little concerned. She had gone all out, working with the folks at Palace Market (where we have an underwriting credit). Grilled veggies, veggie platter, cheese and meat, and a whole bag of crackers (which she had been instructed to purchase). A large amount of Mt. Tam cheese was left over from the play – sitting safely at 41 degrees since then. It was an impressive spread, complete with a delicious cake from Bovine Bakery – thank you Bridget! 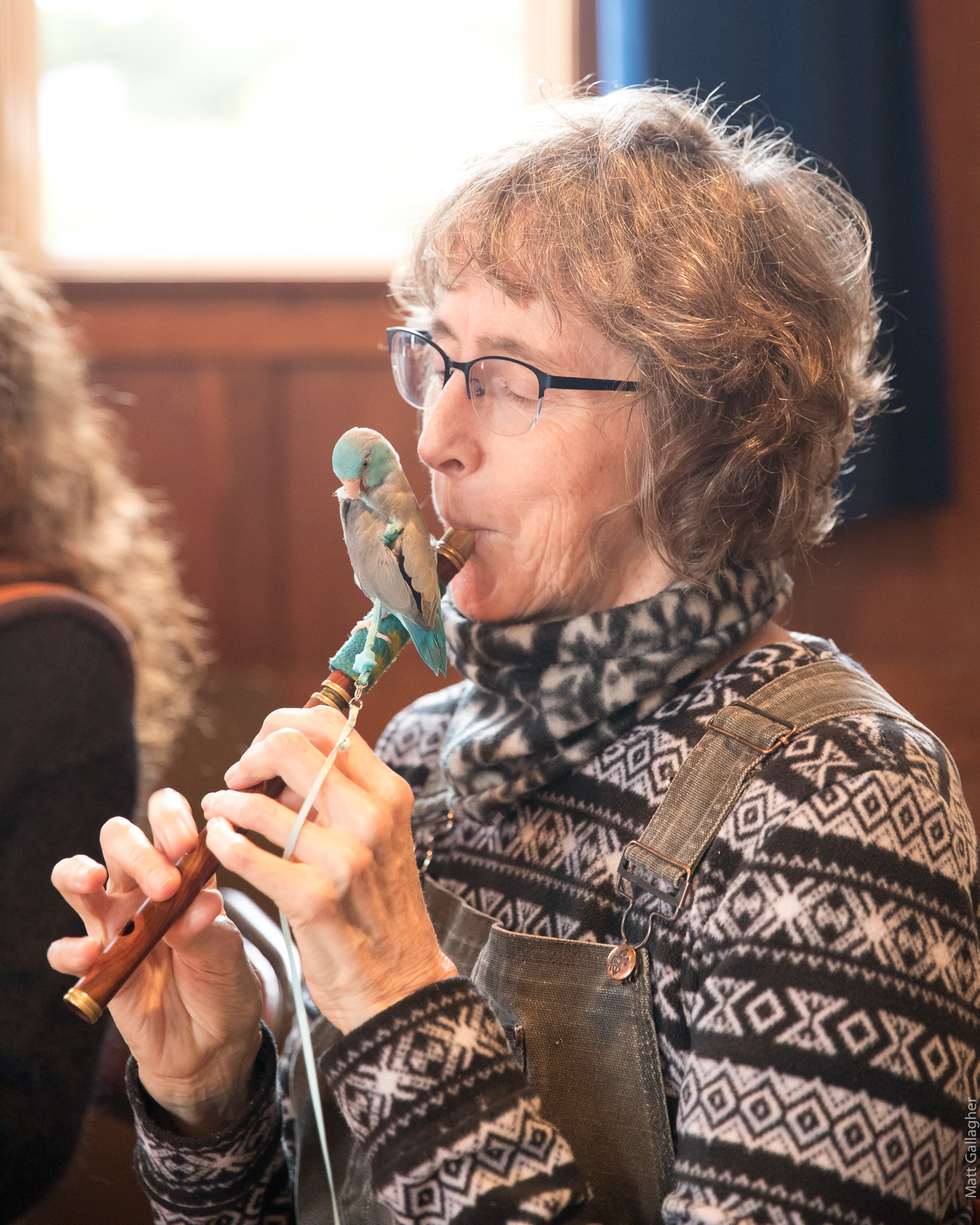 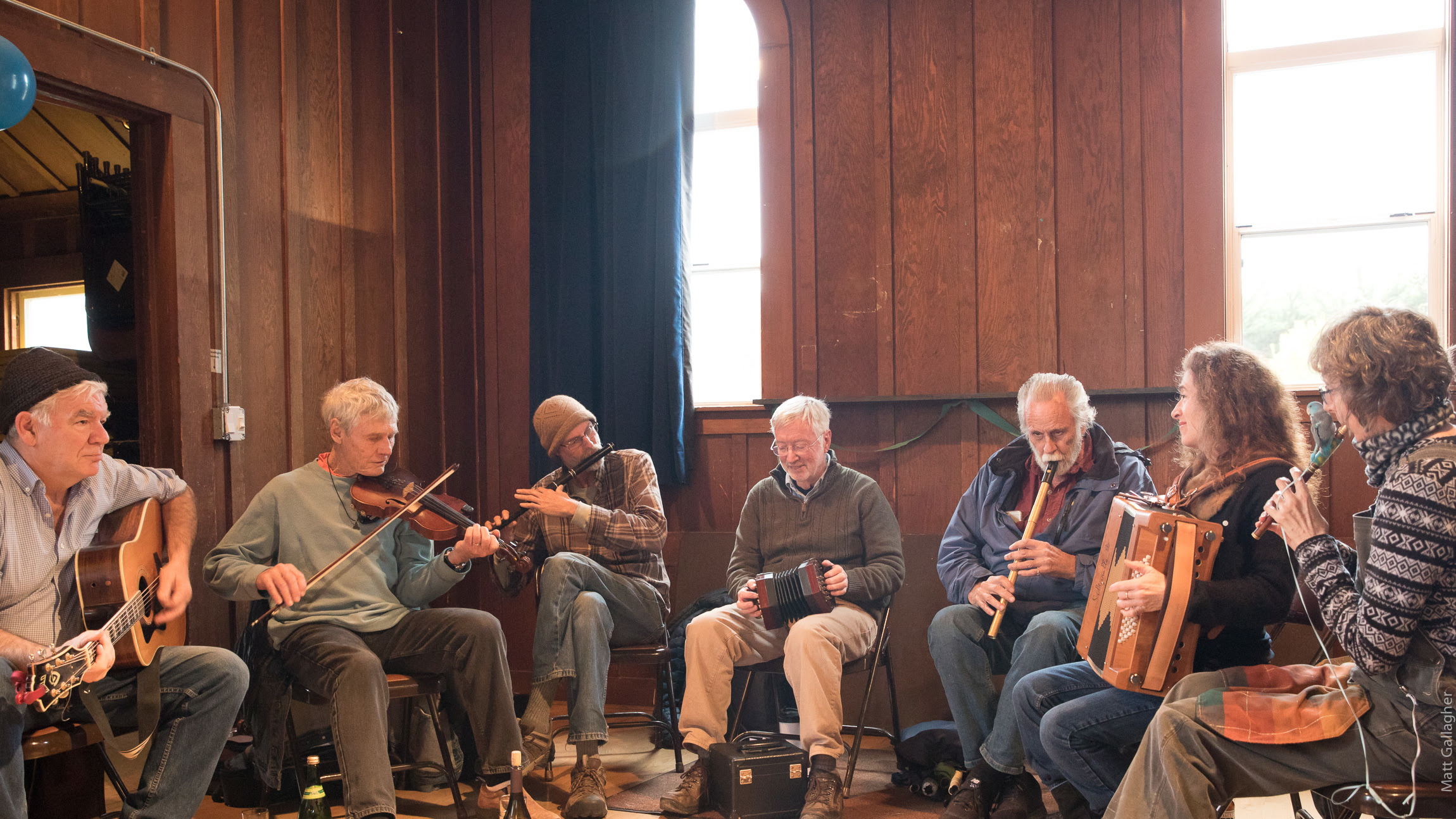 The Turf Cutters.    Photo: Matt GallagherWe stood in the empty church space at the Dance Palace. The Turf Cutters started to show up. The Irish band that Lyons frequently hosted on The Celtic Universe, and who pool their donations for every pledge drive. When I tipped them off that we were having this party, they immediately stepped up to play, including the flutist with her little parrotlet Charlie. 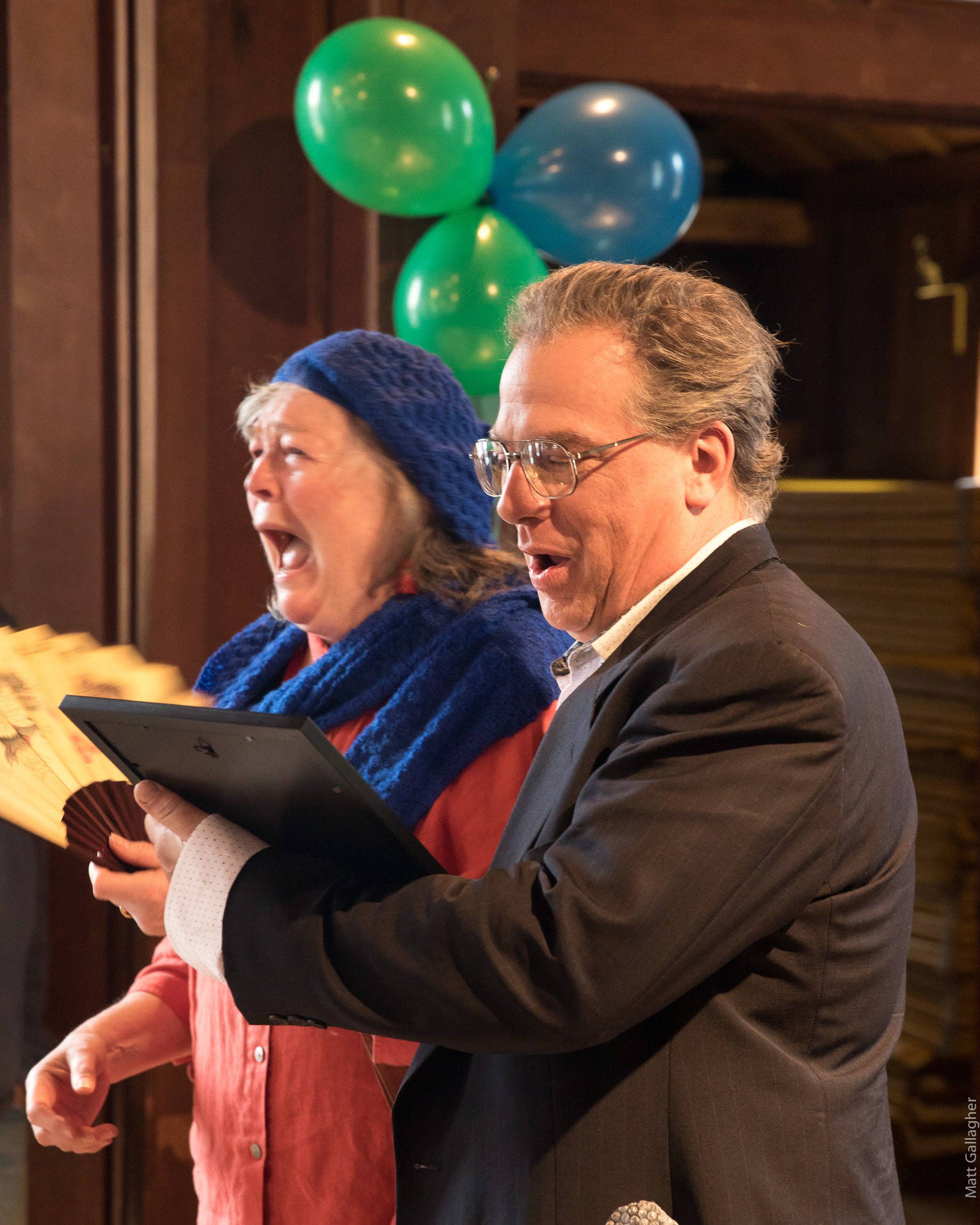 Tom Gogola from Senator Huffman’s office and Lyons Filmer.   Photo: Matt GallagherIt was just three o’clock and the first few folks ambled in, then a few more, then more, and more until the church space was filled to standing room only! Lyons was surrounded by her friends, fans, family, and admirers, all wishing her well. Tom Gogola from Senator Jared Huffman’s office arrived and honored her with a Congressional Certificate of Recognition. I must say, Tom cleans up well! 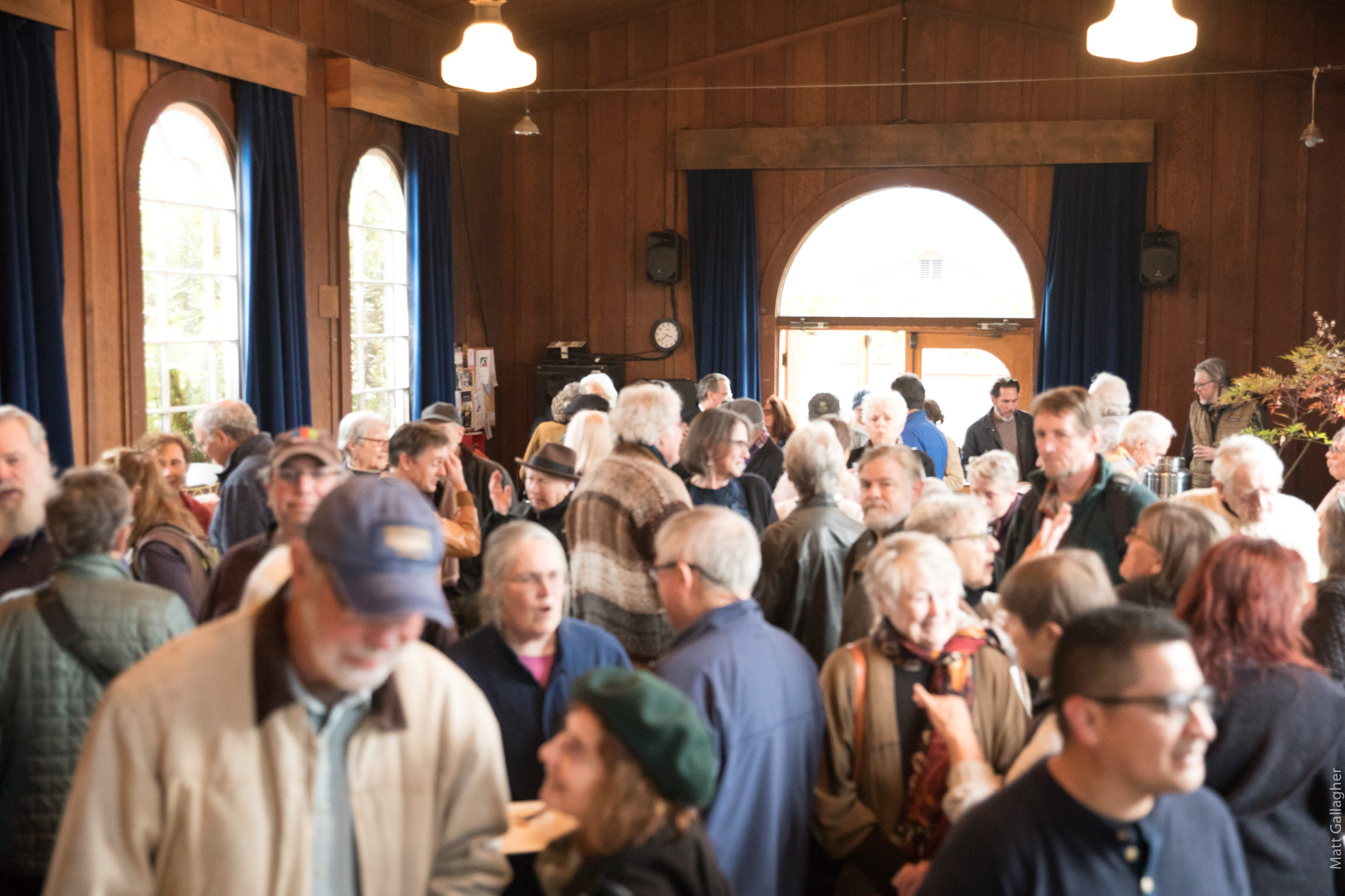 Standing room only!    Photo: Matt GallagherBy 4:30 PM folks were starting to peel off, the 49ers were staring their game with the Packers and those that had been there since 3 PM were starting to look fo their coats. We needed to strike now. Hitting a butter knife on an 8 oz glass quieted the crowd, and we gathered on the stage in front of the Turf Cutters, presenting Lyons with a surprise gift of donations from close friends and colleagues amounting to enough funds to send her to Ireland – a place she has never visited. Close friend Ellen Shehadeh agreed to travel with Lyons. To say Lyons was surprised and stoked, would be an understatement. Thank you Steve Costa for this perfect suggestion! 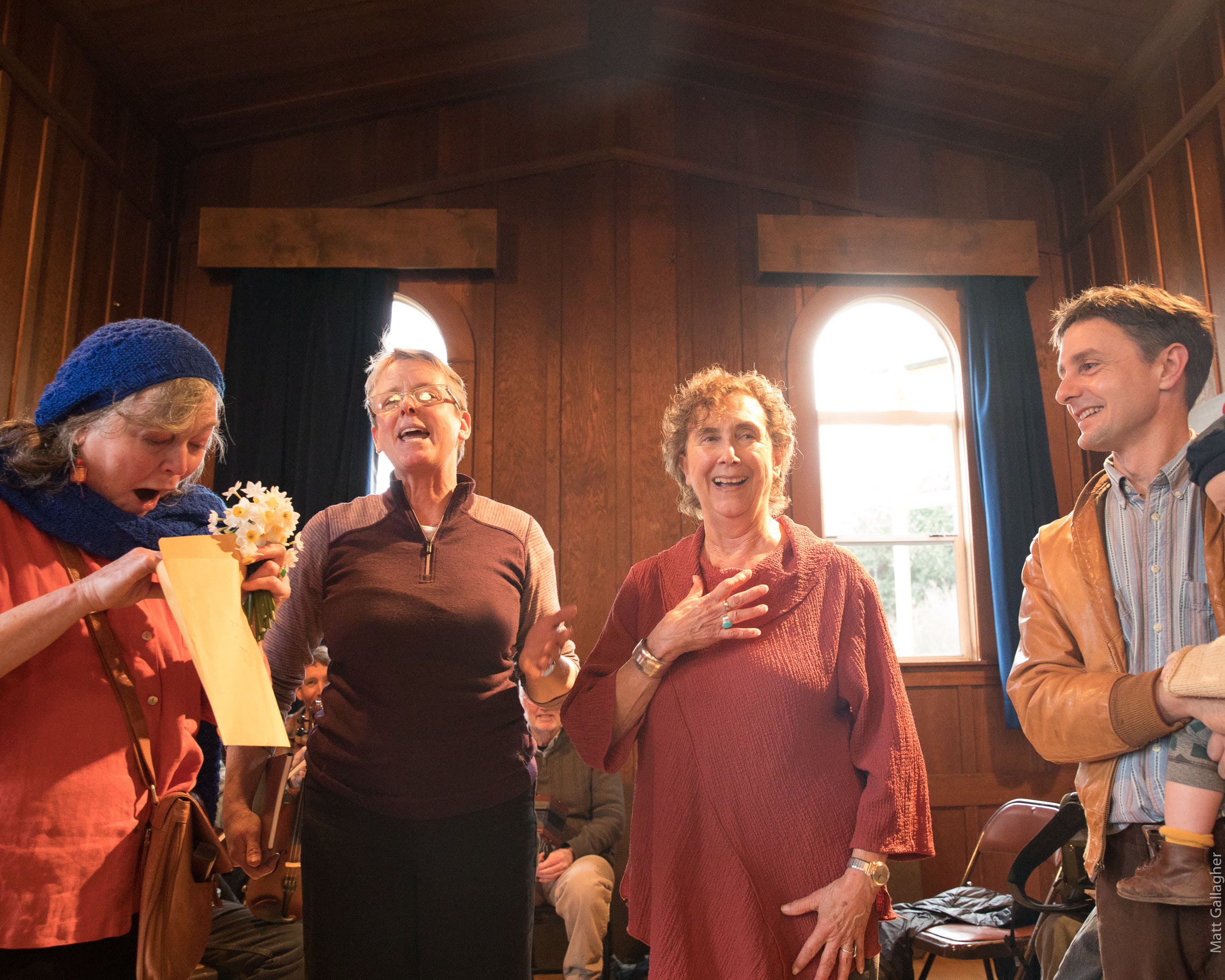 Lyons Filmer, Amanda Eichstaedt, Ellen Shehadeh, and Jeff Manson (Robin’s leg) . Photo: Matt GallagherMia presented Jeff with a business card holder, which he promptly populated, and a bottle of worry dolls, you know, for dealing with volunteer programmers. The cake was cut (it was delicious), and things wrapped up. I was driving home just as Grey Shepard was starting his show at 6 PM. I was beat. I made a cup of tea, put on my pajamas and climbed into bed with my book. 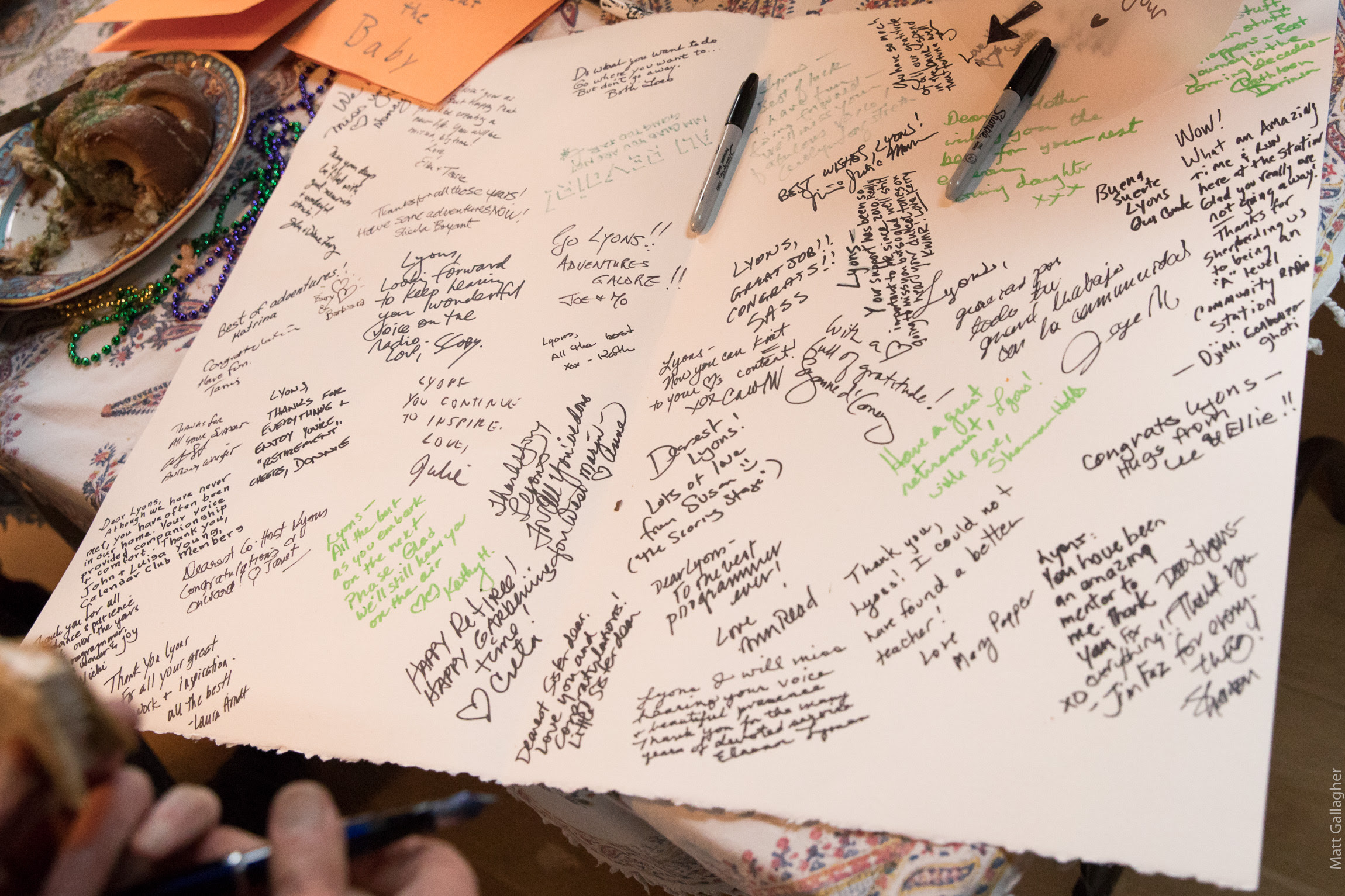 Lyons Filmer’s card.   Photo: Matt GallagherThank you to everyone who came out, to Mia for her preparation, creativity, and photos, to Ian and Dusty for showing up at the perfect time, to the Turf Cutters for playing tunes, to Tom Gogola and Senator Jared Huffman, and to Steve Costa for the idea for the Ireland trip, and to Ellen Shehadeh for being a great friend to Lyons, and to KWMR. Thank you Bridget Devlin and Bovine for the cake, and to Matt Gallagher for taking such great photos.And thank you Lyons for your years of dedication and hard work as KWMR’s Program Director!Next up! Sweethearts of the Radio on Saturday, February 8. We hope you can join us. Our emcees this year are long-time KWMR programmer, and current KWRM Board Member Gus Conde and long-time programmer Loretta Farley. Come party with us!I have a great job,

Amanda Eichstaedt
Station Manager and Executive Directorp.s. My joke about 15 people from Bolinas all agreeing on “anything,” was a great hit. And it’s true, not one person from Bolinas (or anywhere) has objected to our hiring Jeff Manson. Yay!