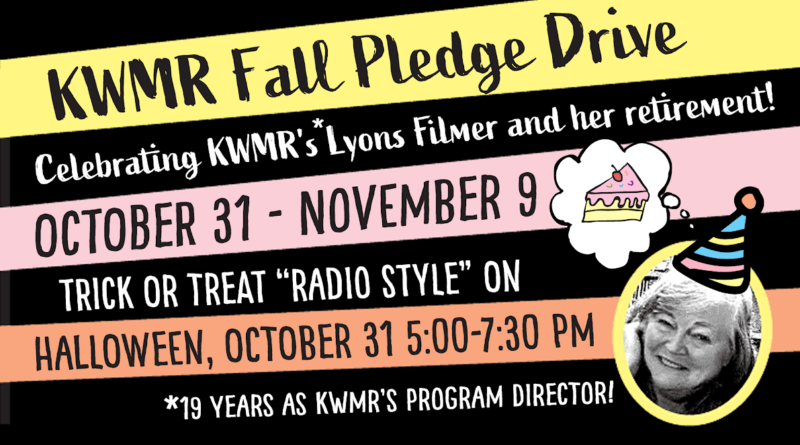 You may not realize, as a KWMR listener, just how many ways Lyons Filmer has touched your life. If you listen to KWMR (and I believe this crowd does) then she has. You know someone has done an exemplary job when you can take for granted the work that they do.

For the past 19 years, following in the footsteps of Program Director Muriel (Aggie) Murch, Lyons has had a hand in all things programming at KWMR. Here’s a list, and I know I’m missing some things.

This is just a sampling of the duties that have fallen to the Program Director here at KWMR. Lyons has handled them with grace. It ain’t easy keeping that many balls in the air.

I thank Lyons for her many years of service to this community. And we are very happy that her dulcet tones will continue to grace the airwaves here at KWMR (she will continue to do her shows: Turning Pages, In the Coastal Garden, Celtic Universe), and that she will be here working through the end of the year, helping with the transition to a new Program Director (yet to be hired).

I certainly have enjoyed working with Lyons over the past 9 plus years. I would not know as much as I do about radio had it not been for her leadership in programming and her collaborative way of working. Lyons is a local hero!

I made a pledge donation to KWMR during this fall drive (October 31 – November 9) in honor of her hard work and dedication and I hope that you will join me! DONATE or call 415-664-9050 to make your contribution.