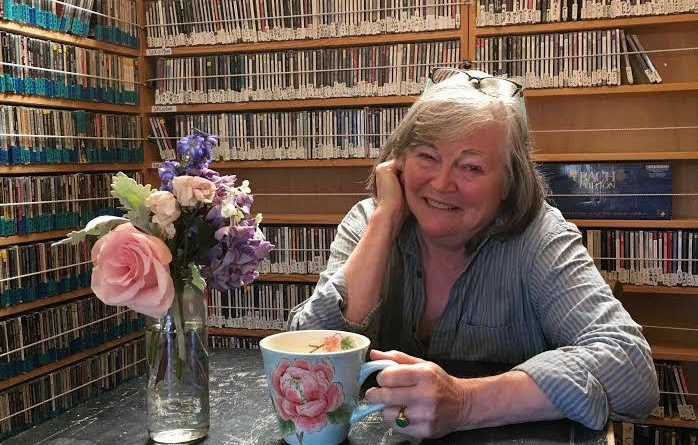 Photo: Lyons with her cup of tea in the KWMR music library.  Cred: Mia Johnson

After 18 years of holding down the programming elements of KWMR, Lyons Filmer has decided to retire at the end of 2019. Change can be many things, but it happens. We are excited for Lyons, and at the same time find it daunting to think about filling this position at KWMR. We have a plan! The first part of the plan is to let people know, and we informed our Programmers recently. Now it’s time to let you all know, our inner circle of readers that stay up on what is going on at the radio station (and for this we thank you). The next step is to post a position in early September, and begin collecting resumes from interested parties. We hope to identify, and secure a new Program Director by the end of the year who will start with KWMR in early 2020.

I decided to interview Lyons. Below are my questions, and her answers. We have a great team here at KWMR, and as we move into this next era of radio in West Marin, we look forward to keeping you informed!

Amanda: What was your first perception of KWMR?

Lyons: I knew Muriel (Aggie) Murch when we were both volunteer programmers at KPFA in Berkeley. She is Founding Program Director of KWMR, and encouraged me to join the reading-books-aloud team she had initiated here. (I had been doing similar programming in KPFA’s Drama & Lit Dept.)

When I arrived in early January 1999, KWMR was on Horizon Cable, and a few months shy of going live on FM (that happened May 2nd). The station was in the old red (now green) barn, upstairs in a two-room loft built into the west end of the cavernous building. The studio was one room; the office, with Aggie and Kay Clements’ desks in the other. Kay is Founding Station Manager. The space was small and a bit raw, but it worked! A community radio station founded and operated by “friends and neighbors.”

Amanda: How would you describe how KWMR has changed over the past 19 years?

Lyons: Undoubtedly, the biggest change was gaining the FM broadcast license. While that put KWMR under the rules of the FCC, it meant our signal could be heard in cars and homes within the admittedly small reach of 90.5 FM. Moving the transmitter from the gravel lot in front of the barn up to Mt. Vision improved the signal’s reach. Getting a translator (a different frequency) into Bolinas was perhaps even more significant because it linked the southern and northern ends of West Marin in a way they weren’t before the radio station. The far-flung villages of our region, naturally, know each other and people regularly traveled from one to another. But after 89.3 FM beamed out in Bolinas, we heard many people say they “felt closer.” After nearly, 11 years, KWMR got the third frequency: 92.3 San Geronimo Valley. Again, the connections are increasing.

All those achievements were complex, cost money the station had to find, required much time and effort on the part of our founders (including Richard Dillman, Transmitter Wrangler), and the interest, enthusiasm, and efforts of many community members. That hard work had mostly been accomplished by my arrival in Jan 1999. I got to enjoy May 2nd, when Richard and Steve Kinsey, then-Supervisor for District 4, “flipped the switch” and people ran out of the red barn and tuned to 90.5 FM on their car radios!

Amanda: What have been your favorite parts about being the KWMR Program Director?

Lyons: Feeding my curiosity (and chipping away at my ignorance) through folks’ ideas for programs and the guests they bring on-air. Getting to know the West Marin communities: neighbors, the folks running non-profits, schools, and businesses, the farmers market and growers….So many intriguing people and stories that we wanted (and want) to get on the radio.

I subbed for Aggie during September 1999 and got a taste…. My interim—then formal—status as P.D. began about spring 2001. Aggie had been scheming to get KWMR a larger, better location, and she worked like a demon, weaving her magic! In November 2001, KWMR moved into Suite #8 of the old creamery building, spitting distance from the barn. I like re-arranging furniture, so the challenge of getting settled into our new space was fun (and hard!). I like “re-arranging” programmers too…training them to run the board and be effective hosts. It’s very satisfying to pass on what skills I have.

As P.D., I get to look at the bigger picture and at a lot of the details. What’s the sound of KWMR? How does it reflect and serve the communities? What program ideas do we take? How do we arrange them across the week? There are schedules, calendars, contact lists to maintain; feedback and reviews to give hosts. What’s going on in our watersheds that we need to get on-air? Connections, connections, connections.

Lyons: The flip side of the pleasure: interacting with people can be both thrilling and exhausting. It is easy to get lost in conversation planning a new show. Phew, now I have to do those program-related reports for the Corporation for Public Broadcasting…. Jumping from computer to on-air studio, to drop-in visitor to staff meeting. Email!

Amanda: What will you do with all your free time once you are no longer working at KWMR?

Lyons: I hope the amount of free time will be as much as I am imagining! I look forward to more gardening (sanity-saving), reading, knitting (and selling more of that). Also I am slowly doing some writing…. And walk more! My aging mom lives in Berkeley and I plan to spend more time with her… and with Gregory.

Amanda: How do you envision being connected with KWMR in the future?

Lyons: I will keep sharing “The Celtic Universe” with Loretta Farley and Ken Eichstaedt; “In the Coastal Garden” with Susan Hayes; “Turning Pages At Nature’s Pace” with Janet Robbins. I hope to do a few other Turning Pages specials with writers who come through West Marin. After a break, I can imagine volunteering at events and maybe on a committee. See you at the Post Office and on the trails, as well as on the air!

Amanda: Thank you Lyons! And not to fear! Those dulcet tones will remain on the West Marin airwaves, at least for now.

So there you have it folks! Straight from the station!