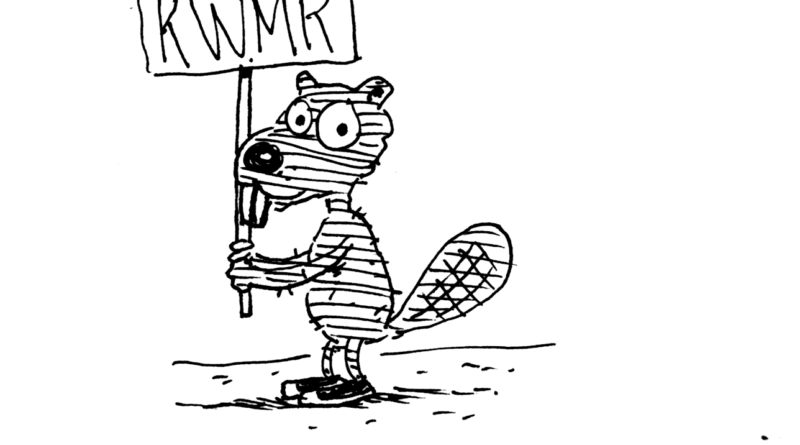 July 23, 2019
From the messy desk of Amanda Eichstaedt…
(Illustration by Jaime Crespo)

If you have ever gazed at the KWMR Program Guide you may have been a bit overwhelmed.Until you get way into the weeds with our programming it can be hard to keep track. I’ve heard statements such as “I just turn it on and hope that I get lucky with a program that I like!” While this is wonderful, and I’m pleased that a scattershot approach to listening may result in a pleasurable situation. There is some method to the madness.

KWMR uses a philosophy adopted by many community radio stations that mix talk and music programming called “Block and Strip.” This does not involve removing your clothing. It means that across the schedule you should find some complimentary programming or “strips.” And then in “blocks” during the day we try to partner complimentary topics. KWMR’s volunteer programmers bring subject matter they are passionate about to the mix, and the search for affordable, produced programming that is engaging and interesting is an ongoing process.

Examples of strips:
8-10 AM Monday through Friday KWMR has morning shows that mix music and talk (some more talk than music).
10 AM Monday – Thursday KWMR runs the “Turning Pages” slot that focuses on literature and the arts.
11 AM – 2 PM Monday – Friday includes blocks of complimentary public affairs and talk.
2 PM – 4PM – Afternoon music! On Fridays you get music starting at 2 PM.
5 – 6:30 PM Monday – Thursday KWMR airs “Epicenter” – a program featuring local public affairs and information followed by the CBC’s “As It Happens” and “National Native News.”
Evenings and weekends feature lots of music!

Mondays: The natural world on “Turning Pages at Natures Pace,” Shows that feature the environment, then agriculture with “Farm and Foodshed” and “The Farmer’s Overalls” followed by “Mile Street Radio.”

Tuesdays: More spiritual in nature including “Attunement” and “Questing: Where is the Path.” Followed by “On Being,”  and then “Inflection Point.”

Wednesdays: A mid-day block of public affairs – one of my favorites, featuring “Planetary Radio,” “Making Contact”, and “Climate One.”

As I said before, Fridays are a little bit different as the music starts at 2 PM following “Reveal,” “Alternative Radio,” and “Commonweal Conversations.”

Weekends feature some fun talk shows such as “Secret Sauce,” “Original Minds,” “Vida with Saga,”and “Off Center Sports” and lots of great music for your listening pleasure.

I have not mentioned every single show, but wanted to give a “lay of the land” in the world of KWMR programming.

KWMR’s Programming Committee, made up of programmers voted in by their peers, KWMR Board and Advisory Board members, staff and members from the public at large, help guide the direction of the programming. These folks help review potential programs, and review our current programs to give valuable feedback to the volunteer on-air hosts. This group meets the third Wednesday of each month at 5 PM at the Point Reyes Public Safety meeting, right before KWMR’s monthly Board Meeting. All meetings are open to the public.

KWMR prints a new Program Guide each month, and they are available online, and at the four West Marin libraries. With the new KWMR App you can easily find archives of programs that they may have missed and listen at your leisure! Out of the area? You can stream KWMR from HERE.