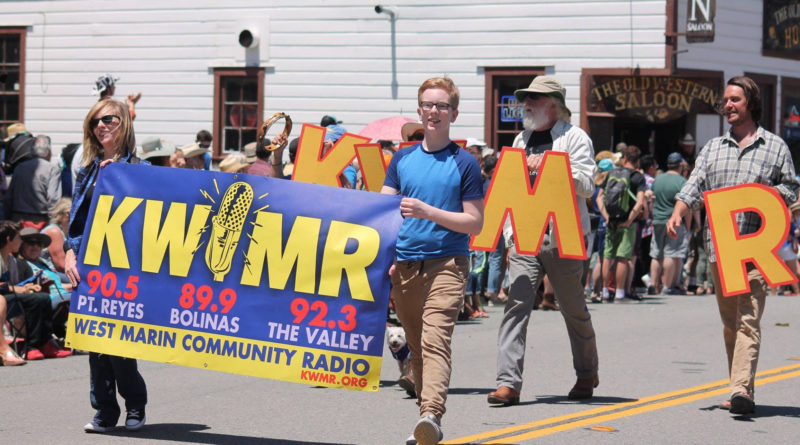 From the messy desk of Amanda Eichstaedt….

KWMR has often participated in the Western Weekend parade, and over the years has done some broadcasting during the parade. This year we are moving on up! You can tune in to KWMR from noon to 1 PM for live coverage from the parade judges stand! Robert Cardwell, and I will be bringing listeners the blow by blow nonstop action over the airwaves. Yeee Haw!

So if you can’t physically be at the parade you can listen to the action on your radio, your computer, or via the KWMR App from anywhere, even if you are out of earshot of the speakers on main street, you can STILL listen. And there will be an archive of the broadcast that we will share via the KWMR.org website after the parade, in case you missed it.

But Western Weekend is so much more than the parade. The action kicks off Friday evening at Love Field for the Parachute Days concert, a fundraiser for Home Base featuring San Geronimo and the Green Leaf Rustlers. Gates open at 4PM. On Saturday Toby’s is the spot to be! Starting at 1PM with the 4-H West Marin Fair(awards at 3PM), and the Gallery Route One: Artists in the Schools and Latino Photography Project Art Reception in the gallery. But don’t run off just yet! The salsa tasting contest by Abriendo Caminos is at 4:30 PM, followed immediately by a performance of the Point Reyes Children’s Choir & West Marin Choir. Stick around for the Mexican Dinner and Barn Dance. The Gran Marshal, and Junior & Deputy Grand Marshals will be at 7:30 PM. Dancing throughout the evening with a great band and professional caller.

I would be remiss if I did not mention that The Haggards, West Marin’s favorite group of illegitimate children (all grown up) will be performing at the Western Saloon Saturday night starting at 9 PM.

Then Sunday, the parade starts at noon, followed by your choice (or why not have both) of tacos from Sacred Heart Church, or the famous Farm Bureau Chicken BBQ! Desserts by 4-H, and the chili cook off also occur at this time. Live music, the cow flop toss, and a great time to hang out with folks and enjoy the afternoon in Point Reyes Station.

The following businesses and organizations played a part in making this all come together. Give them a big hand!

It takes a village. Thanks to everyone who helps to make things in our community happen.

p.p.s. Have you signed up for Alert Marin and Nixle? Good to get this sorted before you actually need them.