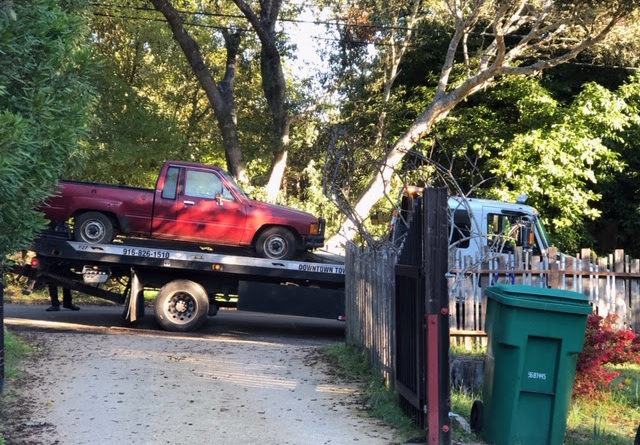 Full disclosure. I have never donated a vehicle. Mostly because I have never had a vehicle to donate. I did have one that would have been worthy of the cause, but I found a sucker, er I mean, nice person who liked to tinker, to take on my old car, Loise. She was a champ, except for that intermittent fuel delivery problem, and the fact that I had moved to North Carolina and she was air conditioning “free.” I was never sure the car was going to make it to my destination. This was pre-cell phone era, and I would give excruciating detail of my route, in case I didn’t show up. I had fears of pulling off to the side of a rural road and getting consumed by kudzu, not to be found until the following winter.

Lucky for you, KWMR has a vehicle donation program, and it gets used! In fact on Monday of this week, two trusty steeds were picked up in West Marin. Dan Morse, longtime KWMR supporter sent off his old pickup truck. He was sad to see it go, but it was time. And KWMR Programmer and Underwriter Mike Varley, of Black Mountain Cycles (KWMR’s local bike shop) donated his wagon.

Mike Varley had also never donated a car, but his reasoning was, “Why not?” It’s simple, no need to hassle with advertising it, dealing with potential purchasers, going through the “selling” process, etc. All you need is the title, you can click this LINK, like Mike Varley did, or call this easy number, 866-KWMR-CAR (866-596-7227), which is what Dan Morse did.

Still have questions? Here is a good Frequently Asked Questions link for you! It includes all the pertinent tax mumbo jumbo – which is important.

Maybe you don’t have a car yourself, but you are sick and tired of seeing a vehicle languishing on the side of the road, or in view of your kitchen window? Recommend that your neighbor or friend donate their vehicle. Every penny counts here at KWMR, and if we can fund your local radio station, while cleaning up the neighborhood, more power to all of us.
Don’t let this happen to you!

p.s. You asked, and KWMR programmers are obliging. Check out the Highlights below for more great promotion of local shows!

p.p.s. Check out the awesome KWMR schwag you can order to represent your local station!  KWMR T-shirts now on sale via the website. Click HERE