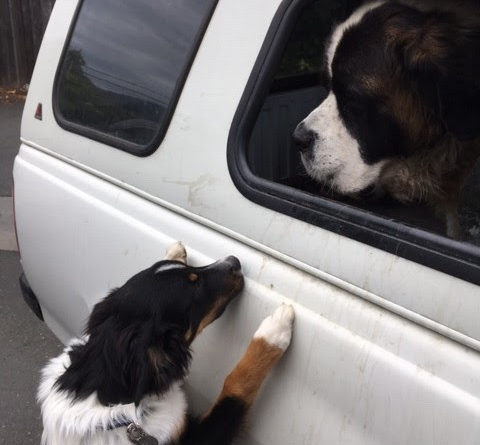 From the messy desk of WAYLON…

I have been at KWMR for going on fifteen weeks. I genuinely like the people. So many people.  It seems like every fifteen minutes someone stops by with a question or comment, sometimes both. We listen to the radio all day long, sometimes we listen to the scanner, the radio and some music that Amanda is reviewing for the station. I also listen for dogs and kids going by, because I like them a lot. I really like the giant dog in the white truck, sort of a huge version of me!

When I’m not chewing something up, I like to sleep by Amanda’s feet. And we go for walks around town to get the mail. Even though I jump into Amanda’s chair all the time when she leaves, even for a second, I don’t want her job. There is just too much typing, even this is really a hunt and “find it,” kind of activity. However, one of my cool tricks is to jump up and turn on ALL CAPS!

Things at KWMR are pretty great. Sometimes the big men people are also here in the annex with us. I like them a lot. We even go upstairs sometimes onto the porch to say hi to the folks up where the new carpet is installed (shortpaw for “no dogs”) and the lady with the biscuits is sometimes there. She is really nice. People come to see her, too, but she isn’t typing, she is attacking them with scissors. They seem to like it. I don’t like sharp things, but I overlook that because she has the biscuits.

I have even gone to work with Ken, I aspire to be a fire dog, but my recall is still sketchy (I come when I want) and he has to go out and do stuff a lot, so it’s better if I come to Point Reyes. I also have a big crush on the white husky dog that gets to ride in the truck. They work just a few doors down. She is so cool. Sort of aloof, but I think she actually digs me. Speaking of digging! I like to dig.

When we go home, I get to tell my older sister Tula, all about my time at KWMR. Then we wrestle. She started to like me when I got bigger. I weigh 38 pounds now and have all my big boy teeth. People say I’m cute, but I prefer the term “dashing,” it covers so much more ground.

They keep talking about something called Pledge Drive. They talk about it all the time! They are even having a meeting about it. It starts on Monday, October 22nd, and goes all the way to something called Halloween. All I know is that they need people to answer phones and bring food (that part sounds good). They want to raise $50,000. I hope someone brings biscuits.

Well, I’m tired after all this and my nose is sore, so I’m going to take a nap now and grow a bit more. Thanks for supporting the work that Amanda and all the cool people that really like me do here at the radio station.

p.s. From Amanda. This is great, I got to work on some other projects while Waylon wrote the newsletter, but I had to clean the keyboard afterwards. Typos are all him! Photos by me.
p.p.s. Congratulations to Ellen Shehadeh for being chosen, at random, as the Editors’ Club winner!