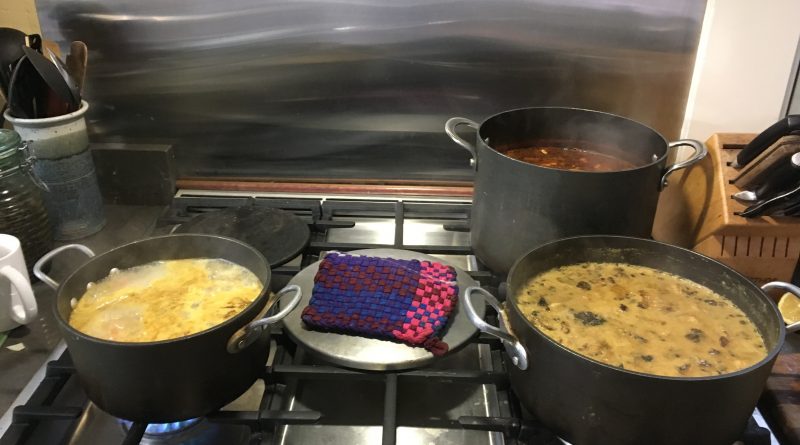 I enjoy cooking. I am genuinely interested in trying new cuisines, and reading recipes, although I rarely follow them. Some of my favorite cooking is when you have limited ingredients on hand, or a random bunch of things from a CSA box, and some delicious one-off is created.

I particularly enjoy making soup. It’s fun to get a good mix of veggies, protein, broth, and grains to satisfy the palate. There is nothing like a hearty, tasty soup. Due to my random manner of cooking food, it is often difficult to replicate a particularly tasty soup. But the next soup might be even better, or just as good.

That is some serious soup!   photo: A. Eichstaedt

I get a similar sense of satisfaction out of KWMR’s programming schedule. Thankfully, KWMR’s Program Director, Jeff Manson finds the same satisfaction in this art form. I am guessing our cooking styles are not that far off either.

It is akin to dealing with a random CSA (Community Supported Agriculture) box of locally grown produce. Programs come to KWMR from community members. Each person has their own passion, obsession, or predilection for music or talk genres. Each a different flavor.

The schedule requires meddling from time to time for various reasons. A programmer retires, or moves, or a produced program stops being produced. Sometimes a certain time slot no longer works for someone, but they want to continue. So we take a look.

As many of you are aware, KWMR’s schedule follows a “block and strip” format, for the most part, with some exceptions. That means that a certain block (horizontal) at the same time fo day, may be of similar ilk. Think “Turning Pages,” or the evening music time chunks. And the strips (vertical) share some common thread of content (hopefully, but not always).

While working with the particular ingredients that we have to create the soup, we certainly don’t want to give anyone auditory whiplash, or leave them with a strange taste in their ears. Sometimes that happens anyway, and sometimes what you cook does not turn out exactly like you expected. Oh well. We are not performing brain surgery here at KWMR, and no programmers are harmed in the process.

We do have some changes in the making, buckle up, so you aren’t suffering from “Kei hea te kaupapa?” (“Where is the program?” in Maori).

These changes will be happening over the next month. Schedules will be updated. Where to start?….

In order to free up KWMR staff from excess engineering duties, the following programs are happening at different times or days. “A Cuppa Jo,” the good news show hosted by Joe Blumenthal is moving from 8 AM on the very same Monday rotation, to 11:30 AM. And “Right Now” hosted by Mia Johnson will be shifting from Thursdays at 11:30 AM to Mondays, opposite “A Cuppa Go.” Got that? Alrighty then. “Trash to Treasure,” a long time program hosted by Madeline Hope, and co-hosted more recently by Buddy Faure, is retiring. Madeline and Buddy will be taking their environmental messaging to a new second Wednesday spot at 8:15 AM during “Swimming Upstream” featuring the varied projects of West Marin Climate Action.

As a result of the open 8 AM spot bi-weekly, Susan Santiago will be relocating to that spot (opposite Peter Asmus and Loretta Farley) with her “Pieces of Peace” program starting in May. “Curio Cabinet” will be come a 2-hour show, alternating with “Top of the Morning” (also two hours), this allows for the return of Charlie Docherty! Howard Dillon will host the first hour solo.

For you hard core “Bioneers” fans. Please do not think we ditched this 30 minutes of luscious programming. It is moving to every Thursday from 11:30 AM to noon. “Trailer Talk” will move to every Friday at 1:30 PM, following “Alternative Radio.”

Alyssa Jane Tanner will be retiring “Do You Ever” which was featured on alternating Sundays at 8 PM, and starting “Tuesdays with Tanner” on Tuesdays every week at 6:30 PM starting in May. A change that has already occurred is that Ananda Brady has begun hosting “Night Beat” every Monday from 10 PM to Midnight. Welcome Ananda! And DJ Lobo of “Radio Loco” fame, will be returning to the KWMR airwaves soon!

Joe and Mo Blumenthal, huge KWMR supporters, and the most dynamic of duos, will be shifting “The Jazz Groove” from alternating Saturday evenings, to alternating Mondays from 2-4 PM. While you don’t hear Mo on the air, she accompanies Joe to KWMR. Jeff (formerly Jeffry) Wilkinson will be starting his “Saturday Night Function” program at 8 PM on certain Saturdays.

Welcome back Paul Smith to the airwaves. You will hear Paul hosting “Classical Thursday,” sharing that time slot with John Levy and Nancy Vayhinger

Please note: The “Bashment Radio” DJs are on a sabbatical (alternate Mondays at 6:30 PM), but should be returning in six months. And similarly, Bill Steele, host of “Night Flight” is also on a sabbatical, and Jeff Wilkinson will be hosting for him on Fridays opposite Neil Dickman’s “Bring It on Home.” And please do not despair, Raul Gallyot has been traveling, but will be back to his usual interviews on Tuesdays at 9 AM very soon.

Have you had the opportunity to feast your ear holes on Sunday mornings from 9 AM to noon? “Earth Baby Radio” and “Second Breakfast” are currently bringing eclectic selections of weekend-appropriate music every week now. Thank you to these DJs for stepping up! Katie, John, and Van!

I really hope I didn’t forget any big changes, but if I did, tune in next week to hear how I was scolded, er “edited.” And a sneak peek at upcoming changes, which will include a focused time block for Spanish Language news and information. I’m pretty certain that this is as much information as you can take in from the current recipe for KWMR programming.

Jeff will bring the celery, I’ll bring the garlic and a bay leaf. We will sauté, then mix in what ingredient we have on hand to make you a delicious soup. Thank you for all your support, for listening to KWMR, and enjoy!

Waylon: Did someone say that they had a tasty snack?  photo: A Eichstaedt.