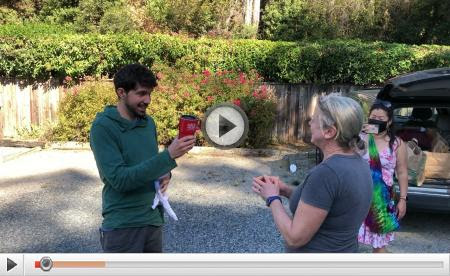 Tuesday October 5, 2021
From the messy desk of Amanda Eichstaedt…

KWMR’s Fall Pledge Drive starts on Thursday, and runs October 7th – 20th. We are slowly getting back to a more “normal” schedule with 77 locally produced programs! We love our volunteer programmers! You can pledge now HERE to get a jump on the action. Search for your favorite show HERE.

Fun story. Several years ago KWMR had red ceramic mugs for a pledge premium. If you follow KWMR pledge drives, we find new and exciting premiums for each drive. Well this mug was pretty popular, so popular in fact, that there are zero left at KWMR.

Avid KWMR listener, former Programming Committee member, and licenced electrician Bill Majoue had received a mug for his pledge, and loved it. But alas, the ceramic mug suffered a fall and the handle broke off. Bill asked if there were any kicking around, there were none.

Bill brought it up a few other times. I always enjoy when people find that asking the same question repeatedly might render a different, and more desirable answer. So I started looking around for a mug. I put out a request on West Marin Commons – crickets.

I was chatting with our web developer Travis one day, when he happened to lift up the very mug I was looking for during our Zoom call. I asked if he would be willing to give it up. He was.

Months later the exchange was made!

And then I was able to get the replacement mug to Bill Majoue! 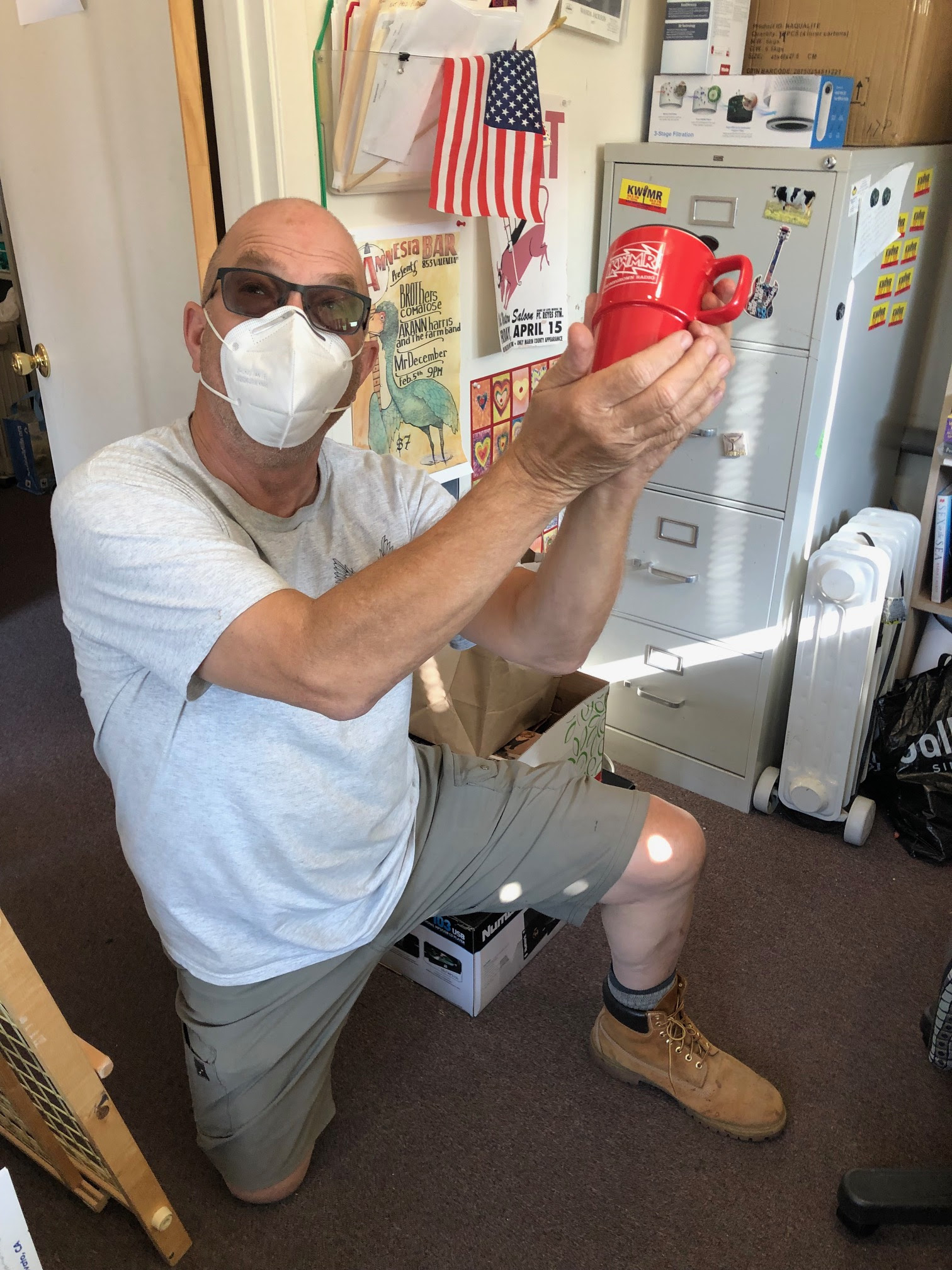 Who was that masked man?  photo: Amanda Eichstaedt

I saw Bill today and he is so happy to have an intact KWMR mug. In honor of all people that like mugs, Alyssa Tanner is adding a mug to the KWMR Store (not a pledge premium, but still…) And in honor of this replaced premium (no promises in the future, but sometimes these things just happen to work out), I unveil to you the premiums for the KWMR Fall Pledge Drive! And premiums can be secured by pledging online. You can get a jump on things, it’s all set up and ready to go. I can attest that the shower cap is awesome. We are all trying to conserve water and a shorter shower where your hair does not get wet is awesome! I had to test it out, and while my head is pretty small, and I don’t have much hair, I did figure out a “hack” to keep ti from being too voluminous on my small noggin. The Eton item is a beast to describe, but is a very cool “go bag” item since it includes a solar lantern and doubles as a water bottle, and has some good emergency essentials such as a water purifying straw, bandaids, and a whistle, among other things. The tote bags are so useful, as well as beautiful. But you don’t need to take a premium to support KWMR.

Don’t forget that the memorial program for Charlie Morgan is on Tuesday, October 12th from 6:30 – 8:30 PM. We have received some great tributes to the late Mr. Morgan, and hope that you can tune in. We will also be taking calls in the studio if we have enough time.

Have you secured your Charlie Morgan T-shirt? They are being sold at cost on the KWMR Store.

p.s. Thank you all for your support, for reading the newsletter, for your feedback and comments, and for being such great community members.