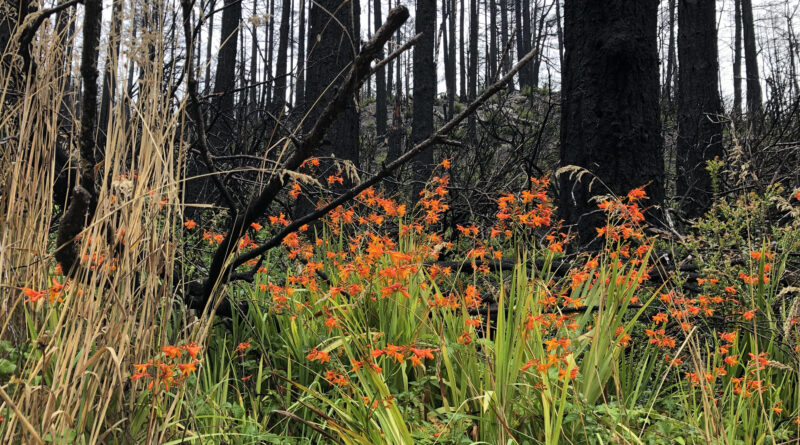 Tuesday August 24, 2021
From the messy desk of Amanda Eichstaedt… 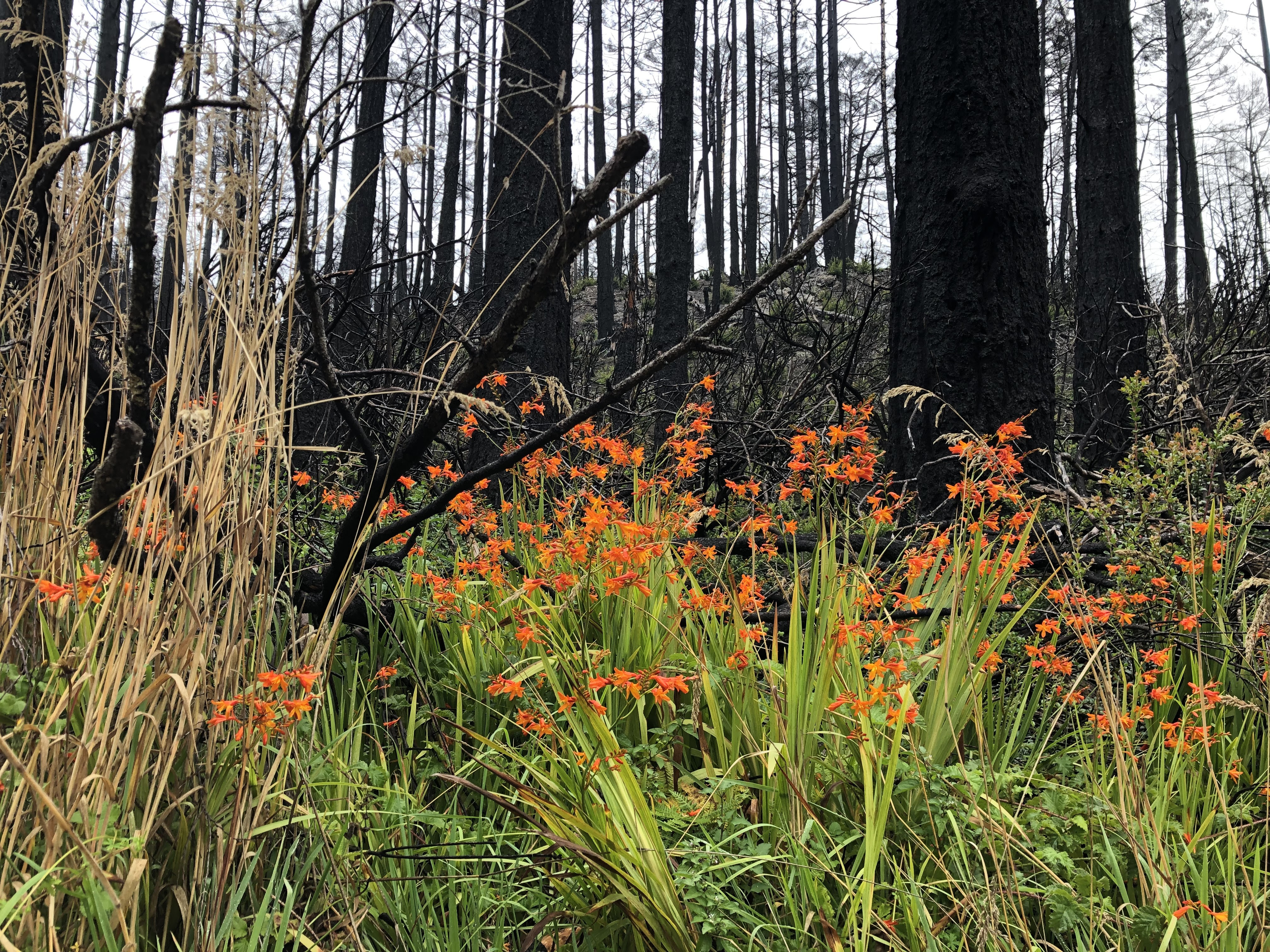 One year ago we were announcing fire updates and concerned about the rapid growth of the Woodward Fire. I recently walked through the heart of where the fire burned on the Sky Trail (Woodward Valley is still closed). Woodward, like many of the current California fires, was started after an intense night of lightning on August 18, 2020 and was fully contained (although not extinguished) by September 30, 2020. The fire burned just under 5000 acres.

While there have only been a few smaller and quickly contained wildland fires in West Marin, the threat still exists. The persistent fog this summer has kept the coastal zone nice and drippy. This fog also assists with surface groundwater that is essential to several of our community water systems. The marine layer, along with the Pacific Ocean being the western border of the Woodward Fire, made for an easier time containing the blaze in an area with no recorded fire history.

Meanwhile, many square miles of forest and complete towns have burned this year due to wildland fires that have been very difficult to contain. Personnel from Marin County are on scene working these fires. The Dixie fire, which started on July 13, 2021 is still only 40% contained and has burned, as of 8/23/21 725,822 acres so far, and continues to spread, even with some of the perimeter contained. The Marin Wildfire Prevention Authority is working to address the challenges that we face in Marin County.

It is muddy up on Sky Trail and the regrowth of the huckleberry bushes and ribes is encouraging. The non-native crocosmia flowers really add some color to the burned out environment. While I know that these flowers are not native to our forests, I love the beautiful orange flowers. Large outcroppings of sandstone have been exposed but it’s apparent that within a year they will be hidden once again by dense growth of native blackberry runners and poison oak.

The palette of the familiar forests of Point Reyes have been altered by the fire and regrowth. My hiking partner commented that it was more of a “Rasta” palette, and indeed the overall view was very different than the usual dense forests in our local park. If you have the ability to venture from the Sky Trail Head off Limantour Road to Sky Camp or further, I recommend it. There is some pretty good climbing at the beginning, but the views of the burned topography are worth a visit. 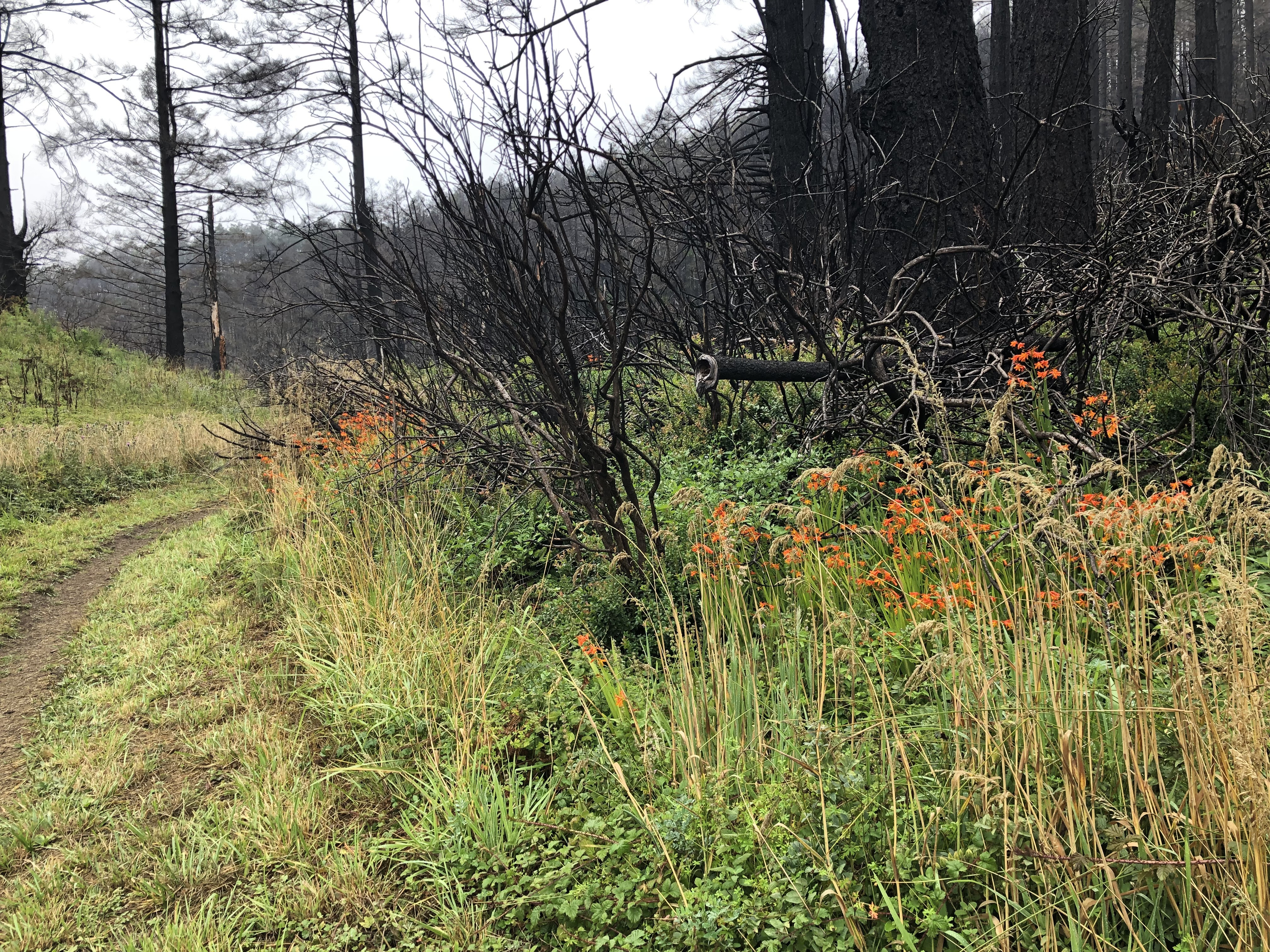 We are so fortunate that the crews and incident command were able to confine the fire to the wildlands. Those of us who live in the interface have a responsibility to be prepared. Have a “go bag” and a plan for evacuation. Get your defensible space organized, and harden your home as much as you can.

Do you know who your Disaster Council contacts are in your neighborhood? In West Marin you can check HERE. Thanks to everyone for doing their part!